he is an Artist, he was born in Roraima (Brazil)

and he is originary from the indigenous group Macuxi

As an Indigenous Contemporary Artist

or doing something in and for the art system

He moved fluently from one another

doing this he fought back the meaning of colonialism

Framing the indigeous culture in the context of contemporary art

to preserve it from modern colonialism

to protect its sacred cosmology and environmental communion

This is the role of Indigenous Contemporary Artists

To show it and to protect its mystery from us

he will never die, a generation of indigeous artist is raising

by his last public contribution in life:

a group exhibition he curated at MAM Museum in Sao Paulo

the project is in the context of Sao Paulo Biennial

Esbell paid most of the expenses of the project

who embody visual translations of their cosmologies and narratives,

making present the temporal depth that underlies their practices.

Contemporary indigenous art is not hostage to the past.

Ancestry is mobilized in the now, reconfiguring enunciative positions

and power relations to produce other forms of encounter between worlds not based on colonial extractivisms.

between colonialism and indigenous culture

Sao Paulo Bienniale is an event that take place in

what was Guarani territory

Guarani were one of the first populations to be contacted by Europeans when they arrived in South America some 500 years ago.

Today, about 51,000 Guarani live in Brazil, in seven different states.

They are the largest indigenous people in the country. Other groups live in neighboring countries: Paraguay, Bolivia and Argentina.

They are deeply spiritual people. Many communities have a house of prayer and a religious leader, the pajé, whose authority depends only on its prestige and authority.

Guarani have always been looking for a land without pain, or "Land without Demon", where souls can rest in peace after death.

For hundreds of years the Guarani have traveled vast distances in search of this land.

In the 16th century, a chronicler noted their "constant desire to find new lands, in which they believe they will find immortality and infinite rest."

Deeply touched by the loss of almost all of their territory in the last century, the Guarani suffer a suicide rate that is unmatched in South America.

The problems are particularly acute in Mato Grosso do Sul, where the Guarani once occupied some 350,000 square kilometers of forest and plains.

Guarani cosmovision, language and history is actively erased by a colonial education curriculum. In São Paulo, Brazil’s biggest city, descendants of the original inhabitants live in invisibility and struggle to keep their traditions, despite São Paulo’s celebrated cultural diversity.

This is the implication of over-consumption of resources.

It started a long time ago.

“Entrepreneurial capital historically emerged in the modern bourgeois city, transforming the economic and social relations of agrarian economies. As its markets penetrated

the people's living place and working place, the city came to invade the countryside, the market to dominate the farm, the mind worker to control the hand worker, and the capitalist

Hyper-regions originated in sites where industrial revolution settled and established the “ephermaculture” (opposed to “permaculture”), with its dependence on constantly increasing, wasteful mass consumption.

Every eco-region (from the Antarctic to Africa to the Arctic to Asia to the Antipodes) soon was mapped to its fullest extent for any economic utility or “ecological possibility”, which means resources.

Funding archaeology, geography, anthropology and palaeontology campaigns, Entrepreneurial Capital gradually rewrote the borders and political / economical competences on the surface of the planet. The modern system of European Nations extended outward from the original Eurocentric orbit of commercial exchange and captured the inhabitants of numerous non-European zones.

Until every frontier was closed and all unexplored territories were mapped.

For a moment, let's focus on what it means “to map”.

Forget for a second that we aim to research, to preserve, to collect.

forget we purely aim to research, identify and catalogue.

The focus is generally on what/who/whom IS

This is an evidence

A map is factual

Imagine a question which embrace also part of the answer

Is that genuine or manipulative?

Can we see now a Map and what they show us (or erase) differently?

What is outside our maps?

Here there are two examples that, of many others

could help us to understand what is on a daily base

For example, QTBIPOC is the acronimous of Queer and Transgender People of Color. Is “an intentional space to build community, envision and work toward our liberation, and have a chance to decompress and enjoy creative expression. This space exists as a disruption to the White classist hetero-normative standards of the institutions we are engaging with and part of and creates a means of coalition building between QTBIPOC on campus and in community”.

Global South*, is meant to refer to:

1 an alternative to the term “Third World", meaning to economically disadvantaged nation-states and as a post-cold war.

Btw, most recently this term is also employed in a post-national sense to address spaces and peoples negatively impacted by contemporary capitalist globalization.

2 captures a deterritorialized geography of capitalism’s externalities and means to account for subjugated peoples within the borders of wealthier countries.

3 it refers to a transnational political subject that results from a shared experience of subjugation under contemporary global capitalism.

The use of the Global South to refer to a political subjectivity draws from the rhetoric of the so-called Third World Project, or the non-aligned and radical internationalist discourses of the cold war. In this sense, the Global South may productively be considered a direct response to the category of postcoloniality in that it captures both a political collectivity and ideological formulation that arises from lateral solidarities among the world’s multiple Souths and moves beyond the analysis of the operation of power through colonial difference towards networked theories of power within contemporary global capitalism.

I could include the term

Global Majority to this note too 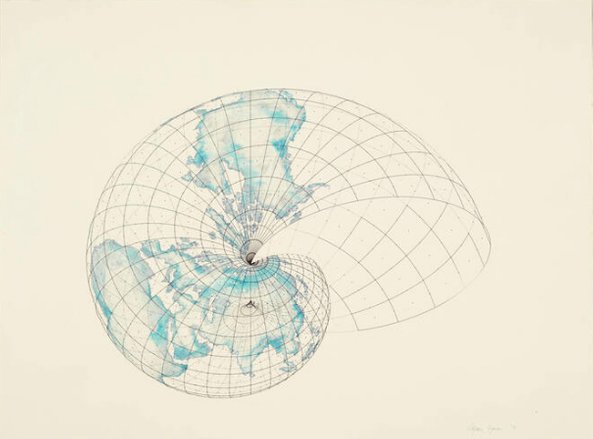 with funds from Charles Tanenbaum

She also addressed the topic of mapping and its implications.

This is from the series of studies "Map Projections", in which topography interacts with isometric projection, (a method of visually representing three-dimensional objects in the two-dimensional format) of a technical sketch.

Here, she projects an accurate geographical rendering of the globe onto an unexpected structure—the form of a snail. This and other works from the series are aimed

to reimagine to earth and the place of humans on it.

As she remarked, “longitude and latitude lines were unravelled, points of intersection cut, continents allowed to drift, gravity tampered with [and] earth mass altered.”

And again this map excludes.

I’ve been very privileged to work in some periferic places

where art really matter for their communities

Because the map wouldn’t include them in any case.

It was relevant to me as it was for them.

We were the art system even if there wasn’t wifi

Even if we was outside the frame; the big lens of the art system

to curate the exhibition

at the MAM Museum,

as part of the Sao Paulo Biennial (in former Guarani territory)

meant to give international recognition to

but also to protect them from Western cultural appropriation.

Despite he died, his legacy will stay with us

34 indigenous contemporary artists had the occasion

to exhibit their works and present / preserve

their identity and all their ancestry brought them

We can expand the meaning of mapping

we don’t rule there

Is a form of Art that embrace also Activism

Differently from propaganda which is based on opinions

Artivism means to take time to understand the dynamics of every action.

Let's start with Nature and Environmentalism

The perpetual destruction of nature originated with human desire to control the environment. The failure of controlling or predicting the future needed the development of infrastructures capable of protecting the inhabitants, their memories but also their accumulated treasury.

This greed for power developed, the commercialization of art in the design salons and artistic studios of every individual imagination mobilised by the market constantly, so stimulated individuals to desire more. The revolutionary development of the commercial arts over the past century parallels in lockstep the emergence of  the hyper-regions.

Commercial art and commercialised artists are simply one of the professional / technical expressions of the aestheticized commerce that rests at the core of late capitalism, and that liberates new wants and mobilises fresh desires in order to justify corporate capital- ism's wasteful consumption of natural resources

Without arts and design, epherma-culture will be an intolerable environment to live in.

As artists we can choose the level of collusion with epherma-culture in the hyper-regions.

Through our choices and actions we can establish spots of eco-regions inside hyper-regions.

This space is aimed to promote awareness on what decolonial environmentalism could mean. 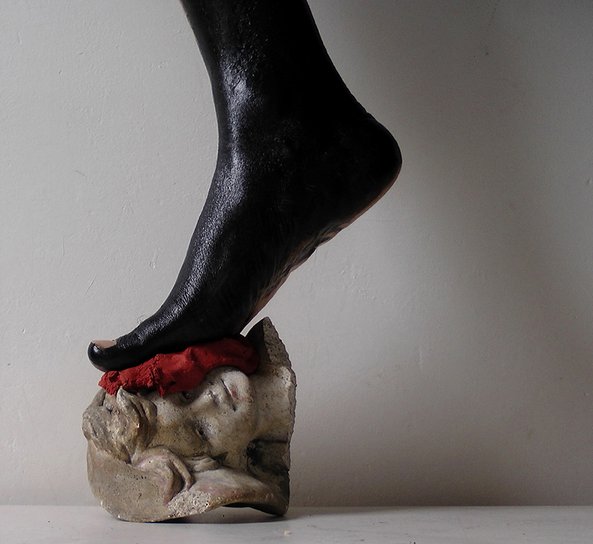 It was personal and political at the same time

I thought there was communities historically impacted

This is how I started my work on this topic

This is how I imagined a “Post-Kingdom”; the life after the hyper-region’s culture.

You can tell me

This is the end of the session