A new Performance at Cabaret Voltaire in Zurich: Andrea Abbatangelo - A Critical 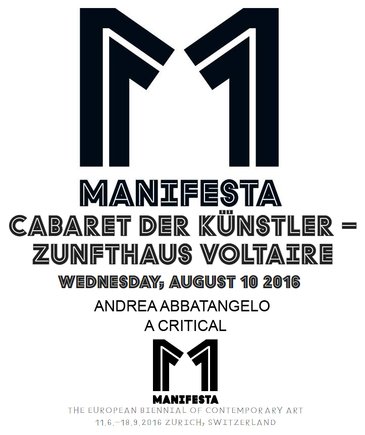 I'm very glad to present my new work A Critical at Cabaret der Künstler – Zunfthaus Voltaire, a section of Manifesta 11 curated by the director Christian Jankowski and dedicate to performance.

Admission to the Performance Hall is restricted to members of the artists’ guild.

«Dada» was one of the most important avant-garde movements in art and literature in the early 20th century. As the birthplace of «Dada», Cabaret Voltaire in the Zurich district of Niederdorf is an important cultural and culture-historical location. The competence centre for contemporary philosophical and artistic exchange with Dada offers a diverse programme of discussions, actions and exhibitions. Cabaret Voltaire offered the Dadaists a protected space, which, akin to a hospital delivery room, is clean, safe and dry. A place where people could let themselves go. Today, Cabaret Voltaire still aims to be a place that resists practicability and in which one can lose oneself «orgiastically, contrary to everything that is useful and practical,  – to address questions that already occupied the Dadaists back then and remain relevant and topical to this day

What People Do for Money – that is the existential question addressed by Manifesta 11. It deals with a topic which concerns all of us. Why do some people earn more than others – for the same work? Why are men often quicker than women to climb the corporate ladder? Why is social status still measured by one’s profession and position? Is the passion with which “workaholics” pursue their jobs simply a pretext for their alienation and exploitation? And there is more: how do you go about finding work in a country that is foreign to you? And how does a fully digitised world work in which robots have finally replaced us – and labour as a concept has become obsolete?

These questions are associated with some of the most urgent socio-political issues of our times but they rarely offer up quick and easy answers. Neither does Manifesta. Instead, thirty artists from all over the world were invited to collaborate with hosts of their choosing from within Zurich’s diverse workforce in order to uncover their working conditions. Zurich happens to be one of Europe’s financial and economic centres with a rich tradition in various occupational areas where the guilds still play an important role in urban life – and as such, the city offers a fascinating environment to explore and investigate.

The “Joint Ventures” resulting from these collaborations reflect in subtle, ironic and playful ways how the people of Zurich act and operate in their professional environments. Some of them produce new goods and objects for the local market, inspiring artists like Jorinde Voigt and Jon Kessler to work together with a boatmaker and a watchmaker, respectively, while John Arnold’s Imbissies offer delicious culinary delights in collaboration with a Michelin-starred chef.

Many others are charged with the polar opposite, to help “eliminate” the affluence of effluents, sources of harm and other things which might endanger the comfort of Zurich’s citizens. Many artists therefore chose to partner with professionals from these occupational categories: physicians fight disease (Michel Houellebecq), just like the fire brigade fights fire (Carles Congost). Security personnel are there to protect against violence and attacks (Santiago Sierra), while sewage treatment plants relieve us from our personal waste and excrements (Mike Bouchet). Finally, undertakers assume the burden of disposing of our bodies after death – having become inoperable and, hence, dispensable (Jennifer Tee). All of them are working to conform to their pre-defined role with a common objective to keep the city clean, safe, secure and healthy – so it can keep living up to its public image.

Moving from the microcosm to the macrocosm, their combined efforts – particularly mirrored by the resulting new works of art – paint a picture of a modern metropolis with all its contradictions, a highly complex professional system which constitutes the conceptual framework of urban life, a well-coordinated yet often paradoxical socio-psychological construct at the intersection between the determination of one’s identity and the assurance of one’s livelihood. These are the places in capitalist societies where each and every one of us seeks to fit in and serve the collective as much as earn the right to be a part of said collective as both producer and consumer.

The resulting new works are exhibited at the two main venues of Löwenbräukunst and Helmhaus, two of Zurich’s iconic art institutions, but also at so-called Satellites, the places where the artists’ hosts hold down their jobs. Michel Houellebecq’s X-rays illuminating his own state of health are displayed at Hirslanden clinic, Jennifer Tee’s work in the morgue of Enzenbühl cemetery, while Mike Bouchet’s cubes made of biosolids make their physical and olfactory presence felt at Löwenbräukunst, offering the visitor an unfamiliar and confronting experience. These new works are complemented by an historical exhibition at Löwenbräukunst and Helmhaus, offering a wide range of exhibits by more than 200 artists spanning five decades, reflecting their examination of professional life – including their own. Indeed, working and making a living in the art business is characterised by many conflicts and contradictions.

Löwenbräukunst is the first port of call and one of the centres for Manifesta events. It is the ideal place to familiarise yourself with the concept and approach of Manifesta, providing detailed information so you can decide how much time to invest in discovering the other locations of the exhibition. Whatever you do, there are two further highlights you should not pass up: one is the so-called Cabaret der Künstler – Zunfthaus Voltaire, an artists’ cabaret at the renamed “Voltaire Guild House”; the other is the Pavillon of Reflections. Life is not just about work, after all – and Manifesta is no different. After all the serious and thought-provoking artistic endeavours, these are the perfect places to experience art in the context of entertainment. Cabaret Voltaire becomes the stage for the newly established artists’ guild, while the Pavillon of Reflections is an enjoyable combination of public bath and art venue, screening documentaries about the development of joint ventures in the context of Manifesta.

Visiting the exhibition is a process and a performance taking place over the course of 100 days. A total of 34 exhibition sites all over the city invite the people of Zurich to strike new paths in their hometown as much as in their own minds. Time and time again, this process takes us back to the pivotal question of what art is – and what it isn’t.