I am an artist working within the expanded fields of sculpture, land art, performance and in- stallation. My work is a confluence of several disciplines such as sociology, history and geo- graphy and my artistic research moves as a language enabling to cross disciplines and platfor- ms, encouraging aware knowledge of fisical and social issues; in this way I produce artwork for the public context. For me performance has a unique contribution to biographic, fisical and social understanding of contemporary concerns. It represents and translates meaning facilita- ting reflection and understanding. 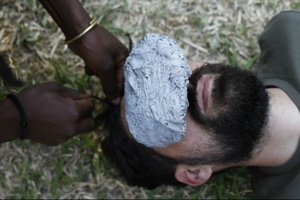 To see the documentation of the workshop go here

I believe performance ope- rates as a language enabling an open dialogue rather than limiting thinking, generating dynamic relations and unfol- ding layers of coding acting as the focus of dialogue and interaction. It encourages in- novative thinking and crea- tive articulations; therefore empowers a different view conceiving innovative pre- sent and future scenarios. I produce artwork in the con- text of the emotional and po- litical body, working on the formulation of ideas throu- gh a research methodology, always determined by the context of the work using si- te-specific responses, as you can see in Project Radio- London. 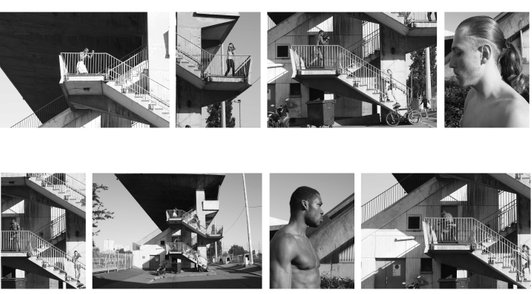 Percorso Pubblico (2019) consists of the interaction of individuals or group of people  between "public spaces", in this case the Galerie Mariton, and "private space" that I meant as an extension of the public role but in a different context, precisely private. Today speaking of public institutions in Western countries seems almost a heresy and my experience is that instead in many non-Western countries private spaces, groups of people, determine the artistic and cultural scene of the whole country precisely because of the lack of Public Institutions 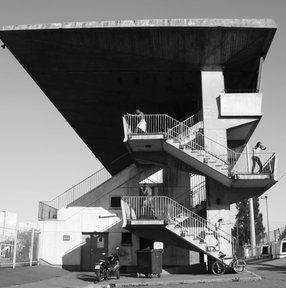 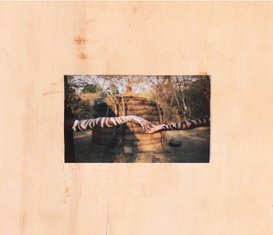 performance for camera, polaroid mounted on panel series of 4 work 25 x 35 cm each

Project RadioLondon consists of a series of sound sculptures and site specific installations which will form a gallery of biographic-por- traits of artists that moved from Southern and Eastern to Northern Europe. The project will provide artists from less developed countries with vi- sibility in more affluent com- munities, thereby increasing their likelihood of professio- nal success.

The goal is to connect groups and collaborative events in physical places to a digital archive of documentation: a Web Radio that will work as a platform of empower- ment and mobilization. I will facilitates and moves people to act together and is also a model which tends to promote long-term relation- ships. Project RadioLondon has been presented at: Villa Arson; Cabaret Voltaire (Manifesta 11); Catinca Tabacaru Gallery and the Terni Festival 2018.

The public sculpture “Project RadioLondon _ Harare” has been included in the parcour of Orientation Trip 2018, a project of:

I envisage that an art practice that focuses on the complex and conflictual relationship betwe- en arts and sustainility could increase the interest of the communities and governements to the those topics and to the art system itself. In Papaver Rhoeas I was aimed to encourage debate around societal concerns, which indeed included the relationship of art and its sustainability and also the role of education - but also alternative practice of self-cultivation.

However, arts practice based on inclusion and sustainability underlines the ethics and aesthetics of socio-material and interactions between resources and production.

firing the clay in the nature, documentation (b/n 35 mm)

The Corn Poppy, (latin pa- paver rhoeas), is a plant of harvest and depends on agri- cultural practices by human activity in the area. It settles on the ground plowed by the plow or turned from agricul- tural machinery: it belongs to the series of battles herbs, so its persistence has depended and threatened at the same time by the human organiza- tion of the territory: its pro- liferation stems from human activity, rationalization of the landscape as well as the threat to its extinction which escapes to an innate power of regeneration.

and based on observession and live action; the aim is to reconcile my artistic pro-duction with ecological sustainability. In the last years I have been formulating the topic that my sculp- tures are small portions of landscape borrowed. I borrow clay from hills or mountains, where it is easy to dig and clean it, modell it and firing the clay in the field, in order to give the ground the ashes of the arched wood, natural fertilizers for the surrounding plants.

The aim of the live action consists of a passage through a landscape, an intermission that speaks of the settlement and migrations of matter and peoples. Departing from Friedrich Hölderlin’s sentence “Where the danger is, also grows the saving power”, I’m working on a a metaphor that sums up the relationship between the landscape and human intervention in the territory. 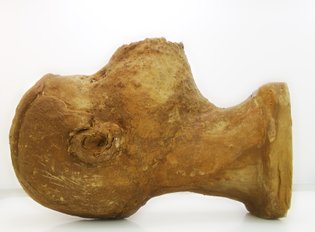 I been inspired by Gilles Clément, one of the land-scapers who have contributed to the evolution of garden idea in recent times. His practice is focused on “working with na-ture, not against it”, has chan-ged the way of rapping to the garden, shifting interest from aesthetics to the wonder of life and biodiversity. At the end of the 1970s, Clément acquired an aban- doned land in the center of France, an unpaved area near the places of his child-hood. In this land of La Vallée he builds his house with his own hands and totally self-suffi- cient. Vallée is a kind of ‘paradise’ (paraiso, ancient term for defining the garden): traci of spontaneous vegetation, insects, aviofauna and small animals. Landscape courses had taught him to eliminate (often with the use of chemi-cals) all that hindered the ra-tional thinking of the designer. HereClémentdecides to follow a new path: to valorize what was already present without destroy ingany thing. It thus begins to apply some of the concepts that will make it famous all over the world.Themovinggarden,infact, begins right in this flap of land: having to trace a path to enter the vegetation, to avoid cutting shrubs and spontaneous plants growing on its path, decides to mark zigzagged lines to circum- vent growth and the movement of vegetation. Thus, the gardener no longer imposes a form, but adapts to the preexisting shapes of nature, leaving the place’s energy to make its course, constantly changing the surrounding landscape.

from the top to the bottom:

Nostalgia has traditionally represented a mythic past, a time significantly far away from the present in years. Increasingly the time frame which promotes a nostalgic response is shortening, a flattening of time, an atemporal and postmodern nostalgia is emerging to shape our present. From this topic are the projects Object & Form for a Post Kingdom and A Critical, which is a performance produced and presented for Manifesta 11 at the Cabaret Voltair in Zurich. Based on theme of Brexit, nostalgia of nationalisms and post-colonialism, the performance involved a lower on stage and the public.

This exhibition proposed the phenomenon of nationalism with a focus on the impact of nostal- gia on our cultural, political and economic lives, whilst examining what has led this re-organi- sation of contemporary experience.

sketch for the performance at Cabaret Voltaire, Zurich

watercolour and pencil on cotton paper

Forms and Objects of a post Kingdom is a series of performance for camera produce in London on July 2016 for the exhibition Forms and Objects, presented at Palazzo Lucarini Contemporary. 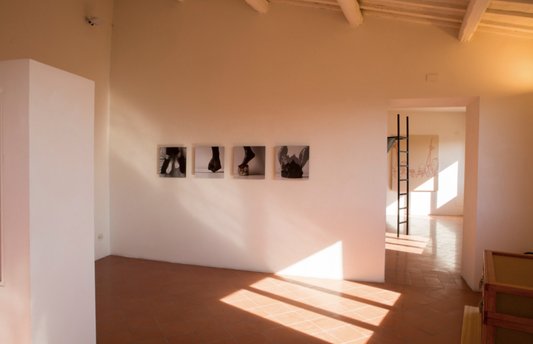 Forms & Objects of a Post-Kingdom

Forms & Objects of a Post-Kingdom

Current Mood (2012) is a series of sculptures and performances, departing from the Beuys’s Social Sculpture and the project will act as part of a research exploring notions of how it could be possible to continue an engaging art practice and be aware of my time. The project will act as part of a research topic exploring possibilities of how emerging art practices could survive in the geography known while wars, political instability and austerity measurements are still in place, resulting to major changes within the arts; these scenarios lead to a huge gap and become limiting and restricting for lesser known artists or projects that are currently still building their audiences, to succeed. 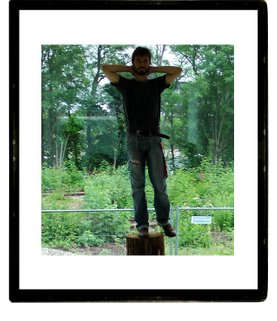 Further works from this series have been presented at Museo Carandente in Spoleto for +50 Sculture in the city, an exhibition to commemorate the 50 anniversary of several site specific art projects made in Spoleto by artists such as Calder, Serra and Lewitt. Later the performance has been presented at the Railway Lecture Hall in Kassel for the performative programme Win- ning Hearts and Minds curated by the collective Critical Art Ensamble as part of Documenta 13. 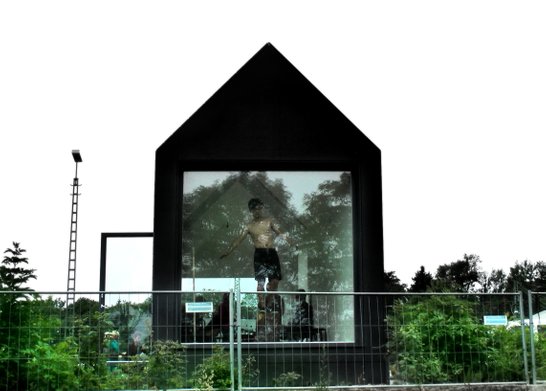